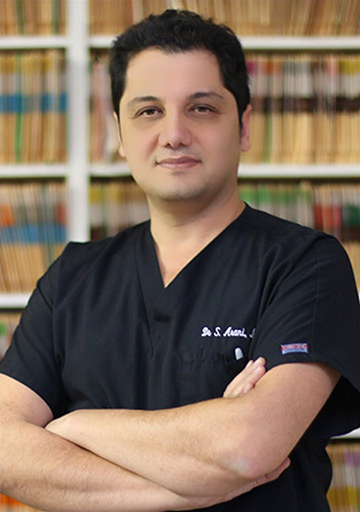 DR. S. ARANI is a published author and medical doctor who was chosen as a top physician on diagnosing and treating sexually transmitted diseases. He graduated from RUSM in 1999 with an MD degree followed by medical graduate clinical training at the prestigious Mayo Clinic Hospital and Maricopa Medical Center in Arizona. He subsequently received a faculty appointment at Loma Linda University School of Medicine (Loma Linda, CA) as an Instructor of Medicine in 2002. He was later appointed as Assistant Clinical Professor of Medicine at LLU in 2003. His passion for improving the health care delivery process as well as his great interest in public health and epidemic disease lead to his interest in sexually transmitted diseases as he founded one of the largest STD/HPV diagnostic and treatment institutions in California in 2004. He established D.A.M.L., an exclusive sexually transmitted infectious disease laboratory in 2006. Under his leadership and innovative approach D.A.M.L. became a pioneer for providing patients with an accurate, quick and precise test result for various STDs in the US.

By 2007 he introduced the 3 step microsurgical destruction method of HPV warts removal. His successful method of removal has helped a myriad of patients to live without genital and anal warts today. As he became well known in his field he has been chosen by many news and media networks to give expert input as a forefront physician in the diagnosis and treatment of STDs and human papillomavirus. His innovative approach of treating HPV warts with new ideology and a high success rate has made him a pioneer and internationally recognized physician in the field. He is a firm believer that patient education is one the most important aspects of successfully treating medical conditions and he has shared his knowledge through various media and publications. Dr. Arani's book, HPV, The Silent Intruder, published in 2013, was the first of its kind, with a 19 chapter in depth review of Human Papillomavirus.

By Appointment only (No walk in)

*For complicated cases and international / long distance patients, please call in advance to schedule an appointment.